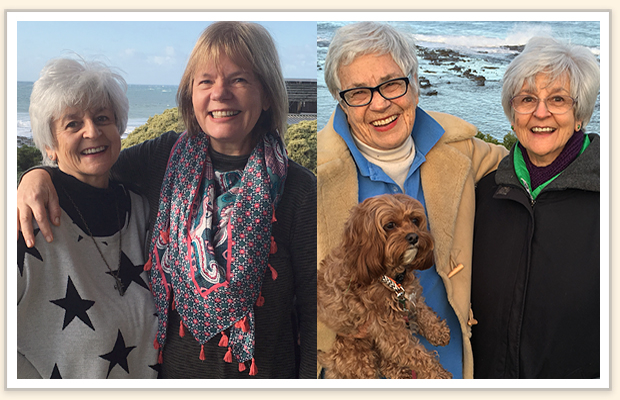 Knit-a-square was founded in October 2008 after a family reunion in Melbourne, Australia.

It is based on the grim reality that there are 140 million children orphaned or made vulnerable worldwide with the greater proportion of them living in southern Africa. They live in dire poverty. They lack love, shelter, food, education and warmth.

Over the years, Ronda became an active charity worker in Soweto.

In conversation with Sandy during the family reunion, Ronda identified one of the many basic problems for orphaned or vulnerable children in South Africa as a chronic shortage of blankets, especially at altitude in the cold high-veld winters. The problem is common to many other poor communities in South Africa.  She explained she regularly handed out blankets to cold children on the side of the road at night.

Greatly disturbed by the magnitude of this unheralded tragedy, the McDonalds wondered if they could start an online movement to raise awareness. It would call on the world’s knitters and crocheters to knit standard 8” (20cm) squares and send them to Ronda in South Africa.

There, volunteers would make them up into blankets for distribution to these children. The idea for Knit-a-square was born.

Sandy called on the knowledge of her mother, Zanny, Ronda’s older sister and a prolific knitter, to assist her in developing patterns for the website and creating the How To Knit e-lessons. Zanny’s gift to Sandy of a blanket made of squares had been an inspiration for the original idea.

Armed with a just a little knowledge of the online space and its potential to connect people, Sandy and Roger worked to construct the website, learning how to tell the stories that might attract the compassion of crafters around the world.

Roger coined the slogans, ‘More hands, more squares, more warm children,’ and ‘your knitted square, a currency of hope’ which so beautifully captured the incredible work of tens of thousands of crafters around the world knitting to warm and comfort the children.

What happened in South Africa

A trickle of squares began to arrive in early 2009. That trickle became a stream after American yarn giant, Lion Brand, ran a small story on the Knit-a-square project in its February 2009 newsletter. This publicity, together with other online traffic driving strategies, helped drive more many thousands of knitters and crocheters to the site.  Soon the stream became a torrent.

Ronda’s contacts in her church community and Soweto provided desperately needed help as the deluge of squares arrived.

Together with a team that included her daughter, Erin Van der Vyver, Lindiwe Ngwenya and Wandile Mkhwanazi, who have become permanent volunteers, they began the tireless work that continues today and has so far resulted in wrapping over 84,000 children with warm blankets.

Ronda, Wandi and Linda, and the board of dedicated Knit-a-square volunteers have continued to build on their church and community networks to keep on wrapping blankets around children. Each time they wrap a blanket around a child, they tell them they are special and have a unique role to play in their country.

The volunteers open the parcels, record where the squares had been sent from, package them into 35 square bundles, and organise for a variety of communities, including the Gogos (grandmothers), to sew them into blankets.

Lindi and Wandi have identified scores of small day care centres in the shack settlements, put together by enterprising women to look after the children. Most of the finished blankets, together with hats and toys are distributed to the small children in these centres.

People around the world, greatly moved by the issue, offered to help in many ways. One such suggestion to assist in handling the volume of enquiries as a result of the response to the Lion Brand story, led to establishing the Square Circle moderated forum in May 2009.

The aim of the forum soon became to support and nurture the growing community. Members were and continue to be encouraged and assisted to develop ideas that challenge, excite and inspire new and existing members’ ongoing contributions and establishing the correct crochet and knitting instructions. These include the squares, beanies, hand warmers and toys.

Membership continues to grow today under the hard-working administration of a band of dedicated team of moderators worldwide, but lead for many years by Pam Antink from the UK, supported by Linda Maltby in Canada.

Aside from knitting and crocheting, the ‘mods’ have regularly extended their duties beyond moderating the forum, inspiring the members, stories, songs and videos.

They have also assisted magnificently in supporting Knit-a-square South Africa with fundraising. One of the most successful initiatives has been the latest KasShop built by Andrea Palmatier.

The community runs Knit-a-square today from all over the world; all dedicated to making a difference in the lives of orphaned and vulnerable children.

In the early years, the goal was firstly to support and build on this community and secondly, to raise awareness of the plight of the children.

The McDonald daughters, Kalai and Cressida, joined in to help implement ideas online to build the community, establishing the Facebook group and developing the CreateCareGlobal Kids™ schools program.

This program had the capacity to put the issue in front of hundreds of thousands of school children and their families globally as well as introducing them to Knit-a-square. It is estimated that the program has been introduced to over 1,000 schools worldwide so far.

A picture tells a thousand words

Ronda took thousands of photographs of the children and their blankets, the volunteers and the shack settlements, often captioned to tell the story of this remarkable work on the ground in South Africa.

The stories together with the often-exquisite work done by the stitchers were assembled into newsletters and distributed first by Sandy as the Square Circle ezine and later by Pam and the mods as KasSnippets.

These newsletters have kept the community informed of the results of their work and of the gatherings of groups of people all over the world who contribute to this cause.

The decision to become a charity

It soon became clear that funding would be required to ensure support for at least the South African operation, so the decision was made to incorporate Knit-a-square under the name KasCare, later CreateCare Global. It became a registered charity in Australia in September 2009.

In Easter 2010, the family gathered in South Africa for a reunion.

It was apparent that Ronda was in need of urgent support and resources to sustain the massive volunteer effort she was managing as the contributions continued to pour in. The first appeal was sent in April 2010.

Much needed help from G4S and Wendy Hardy

During this visit, a mutual friend introduced the McDonalds to Wendy Hardy.  Wendy was working at the time for G4S South Africa, a branch of one of the world’s largest security firms, she immediately saw the opportunity to help.  Initially, she organised to have blankets sewn together by offenders in a large prison which is managed by G4S.  She became a dedicated volunteer herself. Later G4S sponsored and provided the KASvan free of cost other than for fuel, for use in the distributions.

For the first five years, Ronda’s family home operated as Knit-a-square South Africa. They had little room to move! Then the opportunity to take up a space at first supported by G4S came up. Today KAS SA operates out of the KasBarn and has room to unpack, sort and store the squares and blankets.

The work to crochet and knit squares to make blankets that can warm some of the many millions of desperate orphaned and vulnerable children continues, supported by tens of thousands of compassionate crafters around the world. As an entirely voluntary organisation, Ronda and her dedicated team continue to need your support.

Every dollar adds up to fund the operation on the ground and ensure that more children are wrapped lovingly in the blankets made by your compassionate crafting.