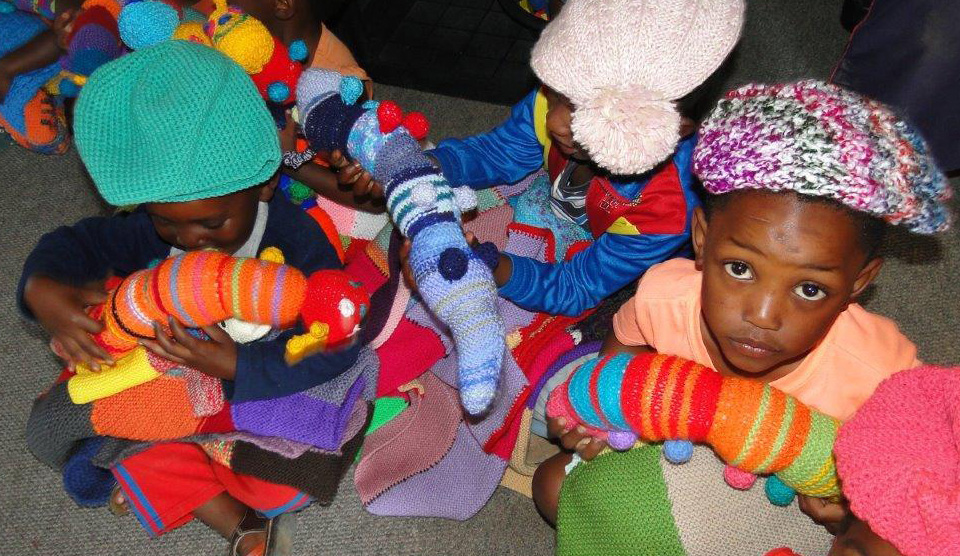 This delightful KAS Cuddlebug toy has been designed as the mascot for KAS. It will give hours of fun to the child who receives this huggable Bug.

k2tog: Knit two together
kfb: Knit through the front of the stitch and then the back of the same stitch

Knit 10 rows, break off yarn and leave on needle.

Cast on 8 sts onto the same needle. (See picture 1)

Continuing to work on these 8 sts only, knit 3 rows.

1. First antenna complete and held on needle. Cast 8 sts for second antenna onto the same needle.

2.Both antennae made. Now knit across both to join. (8 sts)

3. Completed head section before any making up.

Continue to work across these 8 sts as follows:

Increase by knitting front and back (kfb) in every stitch. (16 sts)

Cut yarn leaving a long enough end to thread through remaining stitches, pull up tightly and fasten off. Picture 3 above shows the completed head section before any making up.

TO MAKE UP HEAD

Fold each antenna in half, sewing along cast on edge and row ends (see picture 4 below). Join back seam of head, leaving a small gap for stuffing.

Stuff firmly, close the remaining gap and fasten off. Leave head aside for the time being.

4. Head section with antennae folded in half and oversewn across the cast on and row edges.

5. Join the back seam, leaving a small gap for stuffing and stuff firmly as shown. Once stuffed, oversew the remaining gap to close. Continue to knit all rows, decreasing by K2tog at each end of the next and every alternate row until 5 sts remain.

Cast off, leaving a long enough tail to seam.

TO MAKE UP BODY

Fold body in half with the wrong side outwards. Join row ends from the tip of the tail to the top of the first section, leaving the cast on edge open. (Pictured). Turn body right side out and stuff firmly, beginning with the tail.

Using small stitches to avoid stuffing falling out, attach the open end of the body to the back of the head as shown. (It may be advisable to use knitter’s pins to secure the head in place at this stage – making sure you remove them all afterwards!)

Increase by Kfb in the first and last stitch of the next row. (5 sts)

Continue to increase by repeating the last 2 rows until there are 11 sts on the needle.

Begin decreasing by slipping the first stitch, knitting the next stitch and passing the slip stitch over (s1, k1, psso) at the beginning and end of this and every alternate row until 3 sts remain.

Slip 1, K2tog, psso and fasten off, leaving at least 12” (30cm) of yarn for making up. At this stage, the foot will look like a small square.

TO MAKE UP FEET

Using the tail end, gather around all of the edges of the knitted square by sewing a running stitch along all sides and pulling into a ‘foot shape,’ packing in stuffing as you go.

1. Foot square piece: showing running stitches around each end (these stitches should be the same colour as the foot, but have been made in contrasting yarn for clarity)

2. Pull up the ends of the running stitches to gather the square and form foot shape (should look like a little bowl). NB: It may be easier to pull up the stitches as you go.

3. Stuff the foot firmly and secure the ends of the running stitches, leaving the top open. Your foot is now ready to sew to the body.

Sew 2 feet to each body section, sewing the open end of the foot securely to the body, ensuring no stuffing can escape.

1. There are many ways to embellish and personalise your KAS Cuddlebug. With numerous body sections and legs (with room for more) there is plenty of scope for adding numbers or letters or flowers or anything else that inspires you.

Note: When using alternate yarns please make sure the stitches are tight by using needles one or two sizes smaller than recommended for the yarn to keep the stuffing secure. If the stuffing does fall out, the children will be unable to repair their toys.

For full postal instructions, please visit:
How to post your squares